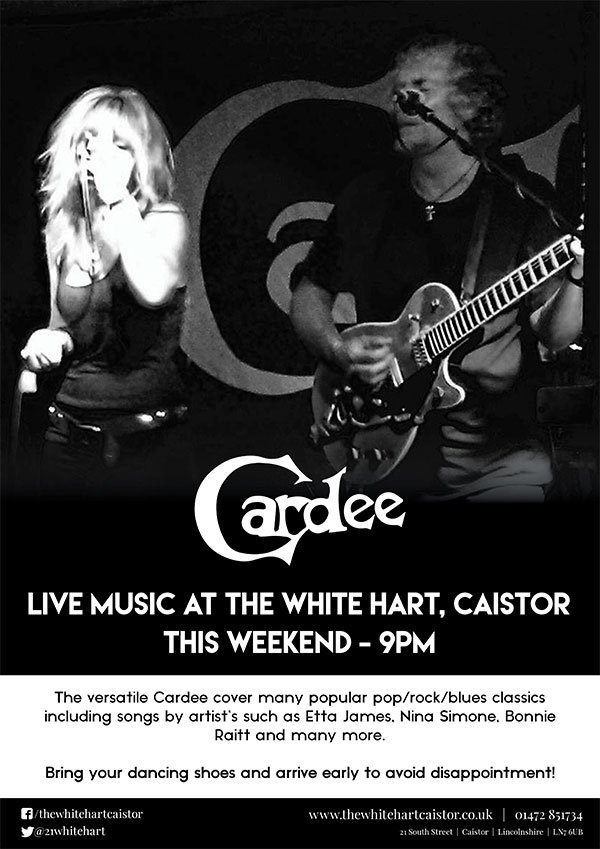 Well, probably the most popular well-known duo band across Humberside and Lincolnshire.

If you’re still not sure, read on…

Cardee’s first live performance was at the Sun & Anchor in Scotter in August 1988 and Nick and Diane have continued to build the reputation of the band since that time, developing both a tight sound and a good musical understanding with each other. During this time they have travelled throughout the UK and Europe playing many festivals including Glastonbury in 2011.’

Over the years the duo has covered many of the popular rock/pop classics and in the past 5 years have introduced a slightly bluesier feel adding numbers by great artists such as Etta James, Nina Simone, Bonnie Raitt and many more, resulting in an extremely rich repertoire of songs. As such the band is very versatile and can adapt its delivery to suit a wide variety of venues and occasions.

By popular demand they are back at The White Hart on Saturday 11th August, so get your dancing shoes on and come and join us for a fantastic night of dancing and drinking the night away.

We use cookies to ensure that we give you the best experience on our website. If you continue to use this site we will assume that you are happy with it.OkCookies